As excitement builds up over the upcoming General Elections (GE), we at Legit Singapore will bring you for a tour of the various parties that are expected to contest the GE.

In our inaugural article, we gave you three reasons to vote for Dr Tan Cheng Bock and his Progress Singapore Party (PSP).

Today, we give you three reasons to vote for Dr Chee Soon Juan and his Singapore Democratic Party (SDP).

SDP is helmed by Dr Chee, a seasoned and battle-hardened politician who is articulate, charismatic, and posseses the relevant political nous. Just take a look at Dr Chee speaking at his past rallies. He stands out because he speaks with the conviction of someone who really believes in his political cause. 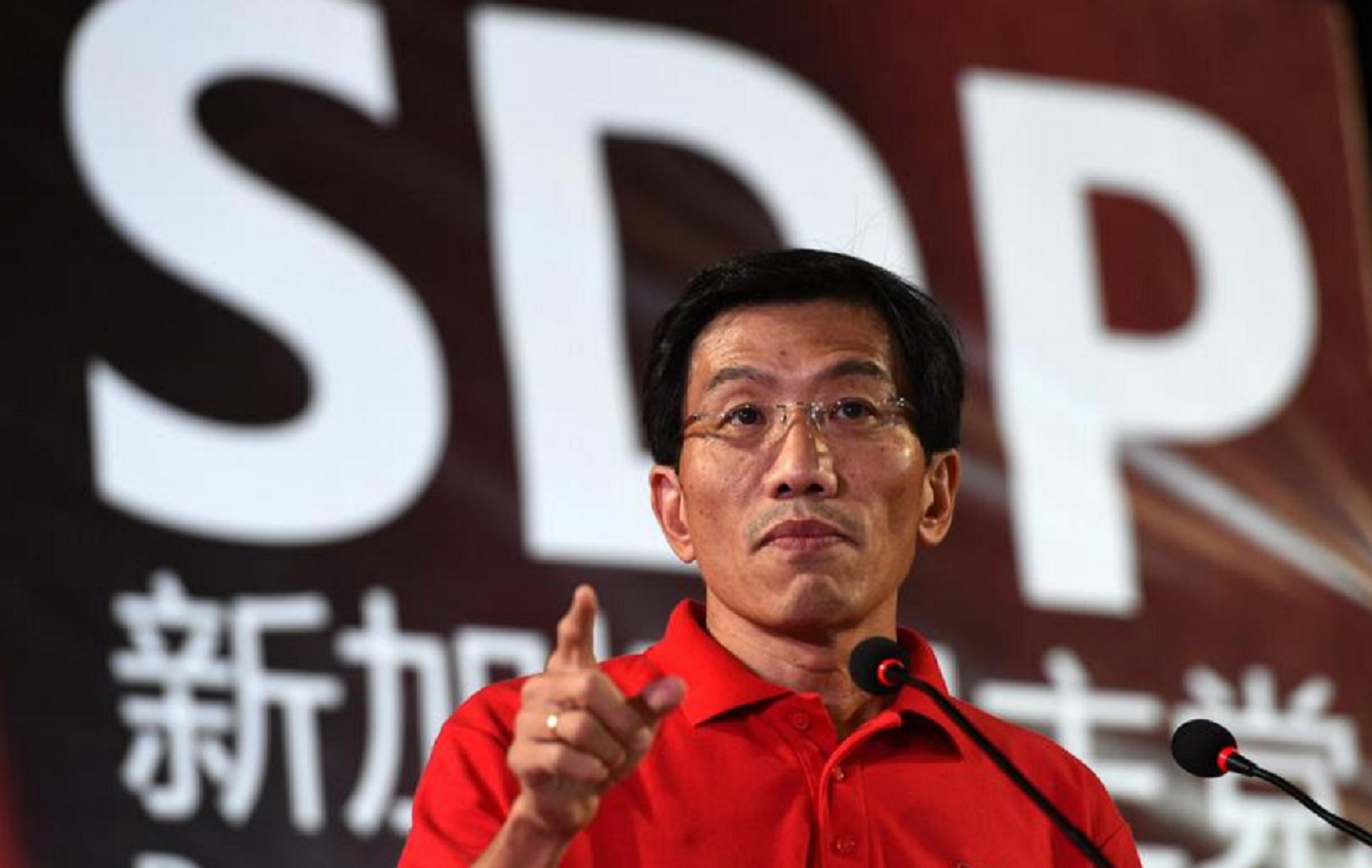 Dr Chee joined the SDP in the early 1990s, after being recruited by his mentor, the incomparable Mr Chiam See Tong. Dr Chee has not looked back since.

Despite several legal, as well as criminal charges and convictions against him over the past few decades, Dr Chee has remained steadfast and not lost any of his enthusiasm. He survived defamation lawsuits and bankruptcy proceedings brought about by key members of the PAP such as Lee Kuan Yew and Goh Chok Tong. He also survived convictions for staging public demonstrations without permits.

23 November 2012 is a significant date for Dr Chee. On that day, he was formally discharged as a bankrupt, thereby allowing him to contest GE2015, after a several enforced-absences.

In GE2015, Dr Chee led the SDP team that contested the Holland-Bukit Timah GRC against the PAP team. Among others, at the rallies, Dr Chee spoke on cost of living issues affecting Singaporeans, the increasing income gap, the importance of having an alternative voice in parliament, as well as the merits of affordable healthcare plans for Singaporeans. 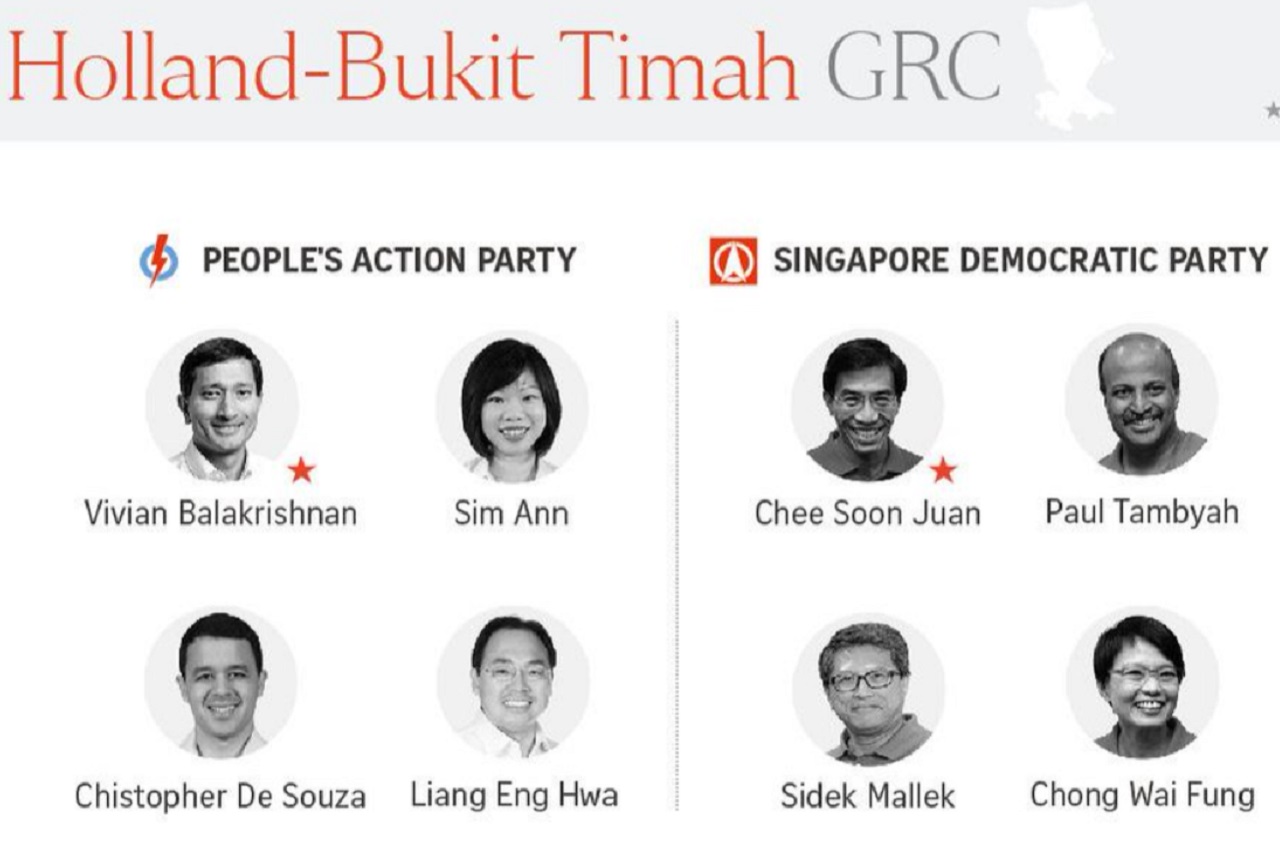 Dr Chee, was rightly disappointed by the result.

Yet, he will not be beaten. He has not stopped. He is  a man on mission, leading the way for his fellow party members, and spending considerable time and resources to walk the ground.

2 The Party Is Ready

Like its leader, the party is ready for the elections. It wants to leave the bitter disappointment of GE2015 behind by contesting again in the very same constituencies they lost in - Holland-Bukit Timah and Marsiling-Yew Tee GRCs as well as Bukit Batok, Yuhua and Bukit Panjang SMCs.

SDP was formed in 1980. It makes it 39 year old this year. There is no better way to celebrate its almost four decades of existence than to win seats in Parliament at the next GE.

The party held a pre-election rally at Hong Lim Park on 19 October to demonstrate that it is organised, and more importantly, election-ready. It has, and continues to reach out to supporters through both social-media and face-to-face contact. The party means business. 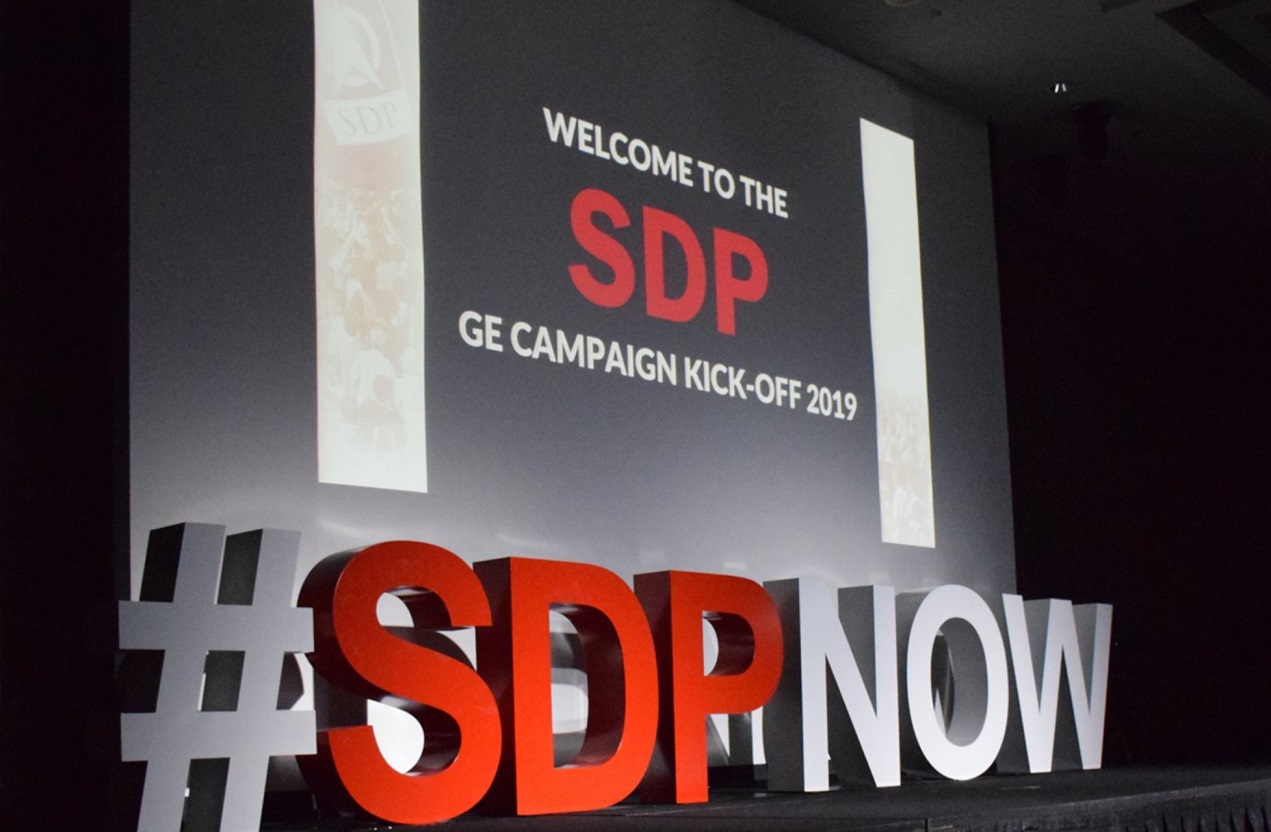 Its manifesto is impressive.

The party's vision is clearly and simply stated - th SDP endeavours to "create a Singapore that takes care of all her sons and daughters, young and old" and where "the people are free and bold, with a strong sense of achievement tempered by an equally fierce regard for compassion and justice".

This is a vision of Singapore that resonates with Singaporeans who are sick of a society focused on results and economic yardsticks.

SDP endeavours to achieve their vision through the application of the 3Cs - Competency, Constructiveness, and Compassion. These are qualities that are lacking or absent in the incumbent government.

In addition, the party also has several policy proposals up its sleeve. According to its Chairman, Dr Paul Tambyah, SDP has policy proposal covering areas such as "housing, healthcare, population, and education". If elected, the party will also "strive for a more open and democratic Singapore", to ensure a "transparent and accountable political system".

Indeed, these are exciting times for the party. SDP is demonstrably ready for the elections.

Like Dr Tan Cheng Bock and PSP, the SDP has built up a lot of goodwill with local and foreign oraganisations and personalities.

Similarly, Dr Chee, realising the importance of opposition solidarity, has articulated his wish to work closer with the Worker's Party (WP) in the upcoming elections. 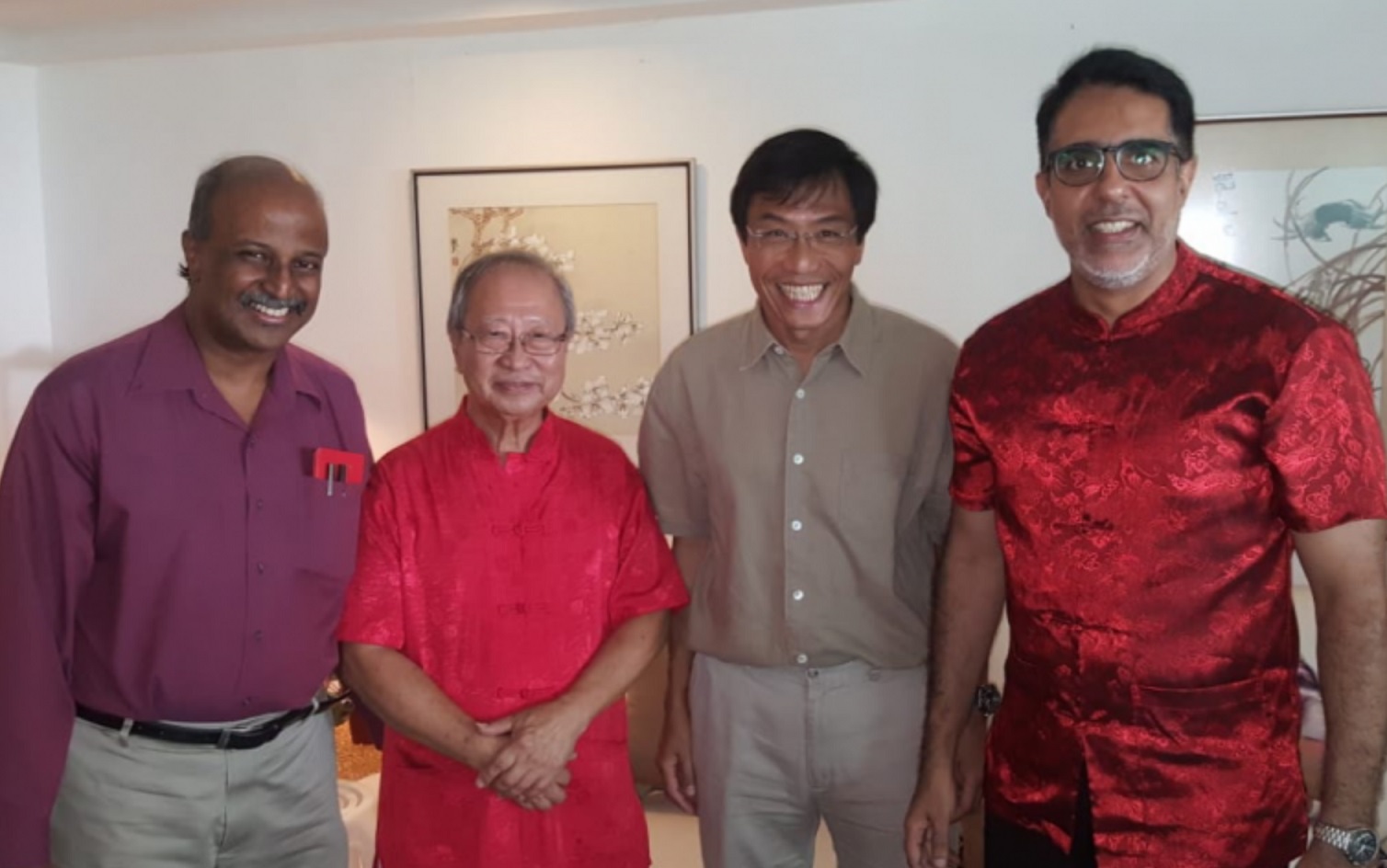 Besides these local parties, the SDP is also represented in foreign forums and platforms such as the Council of Asian Liberals and Democrats (CALD).

It is not a fly-by-night kind of party whose who appear before, and disappear after and election.

SDP is a force to be reckoned with.

So people of Holland-Bukit Timah and Marsiling-Yew Tee GRCs as well as Bukit Batok, Yuhua and Bukit Panjang SMCs, your future is in your hands. Worker's Party's Pritam Singh took to Facebook to speak up on PAP's "divisive approach to politics" and how it took 7 years to build a Barrier-Free-Access ramp at Blk 108 Bedok Reservoir Road.

Residents have requested for a ramp since 2012. However, the ramp which would normally take months at most to build, will be open only today.

"In opposition wards like Aljunied and Hougang, the losing PAP candidates are the Grassroots Advisers."

In a speech at a rally during the 2015 elections, Pritam Singh also spake up on these Grassroots Advisers before. These Grassroots Advisers help gain political milage way beore the next elections for the PAP as they were appointed by the losing party. Some of these Advisers even went a step further to badmouth the opposition members. In his speech, Pritam also asked for these advisers to come after the President, who is not supposed to be linked with any political party, so that they can work on having a more unified Singapore with Grassroots Advisers who actually care about the residents.

However, this has obviously not been done. With a ramp that took 7 years, we can see how dirty the PAP is playing. Pritam Singh also mentioned how other proposals by opposition MPs for the community are commonly ignored by the People's Association.

How many of us residents are suffering because of their petty politics. WP is working on giving the citizens a better life and the other party is trying their best to stop them.

This cannot go on. We should not be suffering just because you lost. The Singapore Bicentennial Conference was held yesterday at Raffles City Convention Centre. During the conference, Professor Paul Tambyah, who is also the current chairman of Singapore Democratic Party (SDP) asked Heng Swee Keat a question that is on most of our minds - whether there was a 'good reason' that the Electoral Boundaries Review Committee (EBRC) was not completely independent of the Prime Minister's Office (PMO).

"The election boundaries currently are decided by independent civil servants, but ultimately the reporting officer is somebody in the PMO"

In Heng's response, he claimed that they are independent and not politically motivated,

He gave the example of former opposition stronghold Potong Pasir SMC, which was helmed by Chiam See Tong and Hougang and Aljunied which are both helmed by the Workers Party. Heng added that from these examples, we can stop doubting the independence of the commission and that they are doing what is right.

"(The independent civil servants) still report to the Prime Minister."

Mr Heng responded: "Unless you are saying they have been politically motivated... but you yourself said they are independent!"

Now, how many of you would believe that they are truly independent? Our current ruling party continues to claim that there are no conflicts of interest in their ranks. Even though the CEO of Temasek, the government's investment arm, Ho Ching, is the wife of PM Lee Hsien Loong. Auditor General, Goh Soon Poh, is the wife of Minister of State Heng Chee How. SingHealth CEO Ivy Ng, wife of Defence Minister Ng Eng Hen. NHB CEO Chang Hwee Nee, wife of Heng Swee Keat. Surbana Jurong Ceo Teo Eng Chong, husband of Josephine Teo. And Lucien Wong our Attorney General of Singapore, PM Lee's ex-personal lawyer.

Of course, they keep up with their claims of saying these people are appointed based on their capabilities. We, of course, are expected to believe that they have searched the globe for talented individuals. But of course they found the most talented are those married to or have worked under Singapore ministers, the elite of the elites.

Well, we are just expected to believe. But whether we do or not, is another story entirely. A political manifesto is a declaration of a party's vision and mission, a pronouncement of its plans and policies.

The manifesto has been in the works for months and is finally ready to be released to the public. They are releasing their manifesto in light of the upcoming general elections which many are suspecting to be early next year. SDP and their party has come a long way in Singapore. They have their own share of supporters and volunteers backing them as well. Hopefully they stand a better chance in winning seats this time round.

SDP has come up with several policies which they have revealed to the public. Dr Chee has since alleged that the current Government has stolen some of their policies and released it as their own after some tweaks. The SDP has some good ideas on how to improve Singapore and it would do well for us to listen and see what they have in store for us. Their manifesto would no doubt bring about some new ideas in their policies and we are all excited to see them.

We hope to see that they can gather more support in the upcoming months. But for them to gather more support, their vision and mission is to improve the lives of Singaporeans unlike some other party who has been dragging us down for their own greed. But I suppose to improve our lives from what we are going through would not be that hard for them to do. Keep up the good work SDP!

The convening of the Electoral Boundaries Review Committee (EBRC) has stirred more debate on the possible dates of the actual elections.

Nevertheless, opposition politicians generally seem to agree that the general elections would be called next year.

They believe that Budget 2020 will be an election Budget, with many goodies likely to be announced.

The politicians, are more concerned with the normally short time-frame between the release of the Electoral Boundaries Report and Polling Day.

They called for a fair and suitable time-frame to allow all parties to make the necessary preparations.

For Singaporeans, it does not matter when the elections are.

What Singaporeans want is a change. Not more goodies. Not more wayang.

And change will sweep through Singapore. 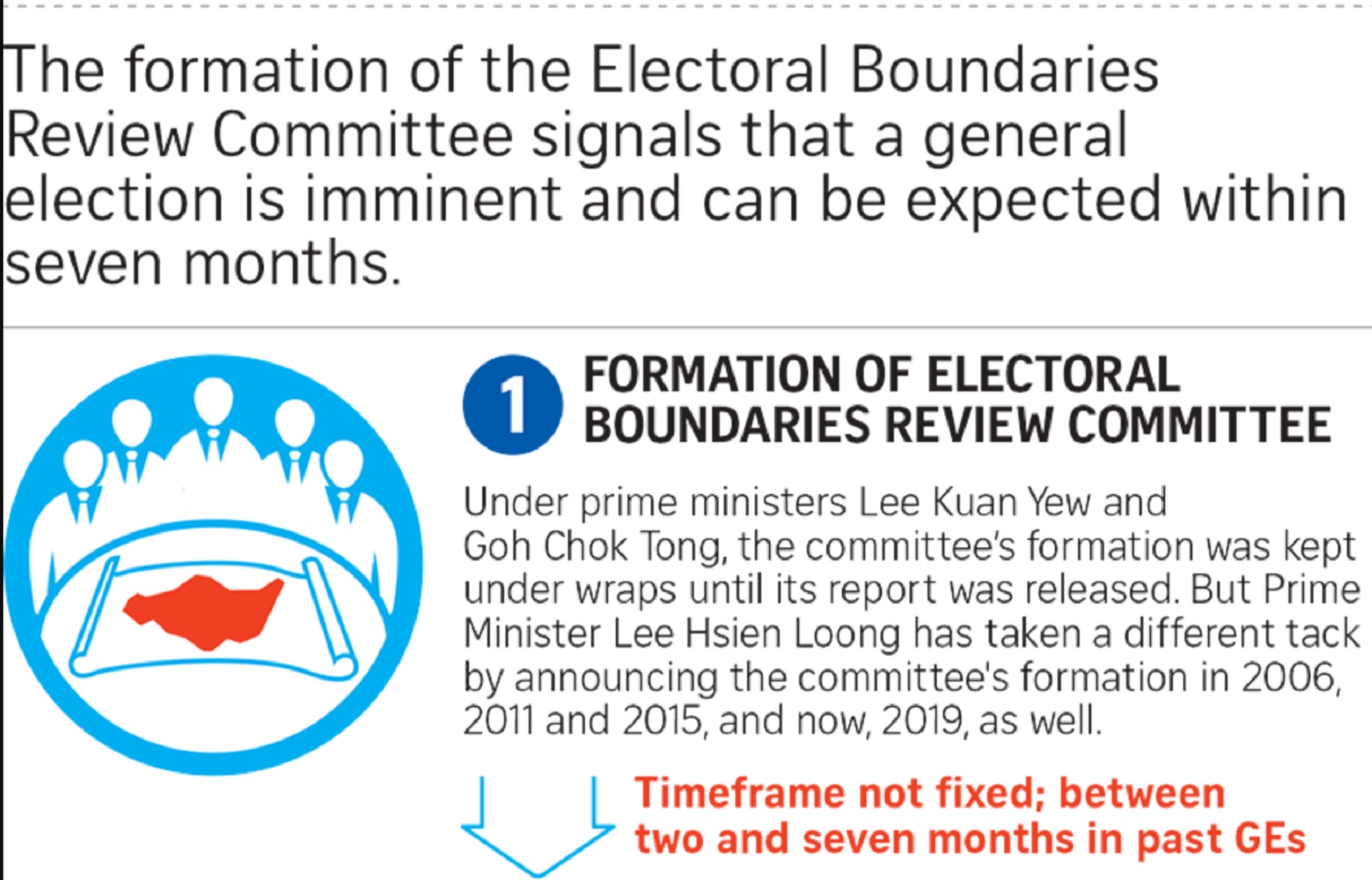 This announcement is sure to be met with delight by Singaporeans.

According to the ELD, the EBRC has been tasked to review the current electoral boundaries, and to reduce the average size of the GRCs.

In the past, there have been allegations that this gerry-mandering of the boundaries have been to the benefit of the incumbent. Unsurprisingly, these allegations have been strongly condemned by the PAP.

The truth will prevail.

Regardless, Singaporeans can't wait for the elections to come.

There has never been a better time to be an opposition politician and supporter in Singapore.

The liberal resistance in Hong Kong, and the opposition triumph in Malaysia are case studies of the possible.

Singaporeans will make the right choice. Change is coming.